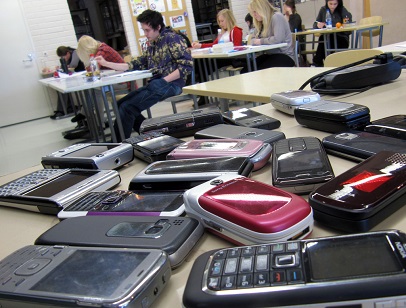 Are Electronics in the Classroom Improving or Hindering Learning?

There’s a growing trend among the best schools in Toronto: previously tabooed electronic devices are making their way into the classroom. School boards are slowly introducing the use of cell phones, tablets and laptops, by both teachers and students. This year, the Peel District School Board and Upper Canada District School Board are implementing a â€˜bring your own device’ policy, which encourages students to bring their electronic devices for academic use in class. However, some educators are still not convinced. In fact, the Elementary Teachers’ Federation of Ontario maintains its stance on keeping mobile devices off and out of sight. So, what’s the right answer? Are electronics improving or hindering our students’ ability to learn?

There is no point questioning the educational value of electronic devices. Today, students are consulting their mobile devices for English-French translations, doing math with calculator apps and looking up facts on their mobile browsers. It is not uncommon to see a high school student type their notes on a tablet or laptop, instead of writing them down by hand. School boards across Ontario are even starting to accommodate wireless devices by purchasing new routers to allow students to have access to Wi-Fi in schools.

Many educators, including the Peel District School Board’s Director of Communications, Brian Woodland, support the introduction of mobile technology in classrooms, citing the need for 21st century electronic learning. Woodland acknowledges that students already use electronics in classrooms under desks, and suggests it’s better to bring these devices to the table, so they can aid learning instead of being a distraction.

Although electronic devices have plenty of merit in classrooms, there are negative aspects which need to be addressed. The biggest issue is the fact that students can be easily distracted by the apps, social networks and messaging options on their devices. Teachers already have a tough time keeping students’ attention, without electronics in the classroom & on top of, or hiding under, desks.

Additionally, teachers have raised concerns over cyber-bullying among students. With access to cell phones and social media in school, this form of bullying may become more prevalent. Professor Jeff Kugler of the Ontario Institute for Studies in Education brings up another issue, which is that if electronics were to be allowed in school, they should be accessible to everybody. As such, there is the issue of equality for students who do not own, or whose parents cannot afford, mobile devices.

Not everyone is on board with the idea of students bringing their portable electronics to school, but there is no doubt that the idea is getting traction. While the Toronto and York public school boards may not embrace electronic devices yet, both have revised their policies to allow the use of electronics in classrooms at the teacher’s discretion.

The reality is that we live among a world of technology, and students are already using their phones, iPods, tablets and laptops in schools, with or without permission. For this reason alone, it’s important for educators and parents to discuss and decide on the best methods to use technology as a tool for learning, as there is no doubt it can be used to help students learn in the classroom. The most important lesson, perhaps, may be on how to use these electronic devices effectively.